In his first experiment with the "boarding out" initiative in 1887, Dr Barnardo sent 320 boys, mainly from the slums of London's East End, to live with rural villagers across the south and east of England.
Many of the children had experienced abuse and neglect, with archive medical records showing that rickets, ringworm and dental problems were widespread.
The archive suggests that the fostered children showed marked improvement in health away from the pollution, poverty and overcrowding of the slums. Many went to school and went on to found jobs.
Within two years, the number of children in foster care had more than doubled - and by Dr Barnardo's death in 1905, some 4,000 children were in foster care. The charity's archives in east London contain thousands of photos of the children. 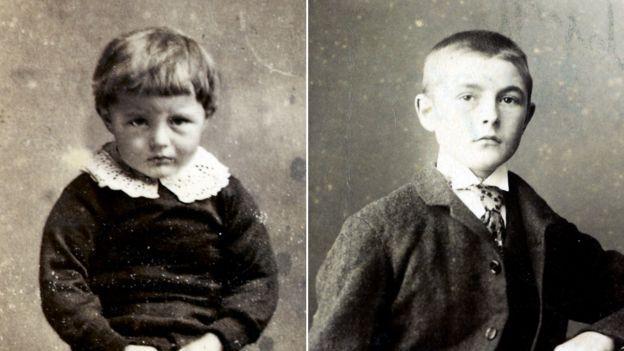 Arnold made regular donations all his life to Barnardo’s in thanks for the 13 years of care he received, including seven years boarded out in the pretty hamlet of Eyke, on the Suffolk Coast.

He left Barnardo’s in 1898 to work at the Hotel Belgravia on the prestigious Victoria Street, London before migrating to British Columbia, Canada in 1902 under the assisted passage scheme.

Arnold was born in a beautiful, mountainous region of Switzerland to Julie, a kitchen maid. His father disowned him and deserted his mother. This may be why as an adult Arnold chose not to be known by his father’s name; Thilibert.

Arnold lived in Vaud, Switzerland not far from his mother where she could visit him. It’s unclear how Arnold came to be in London, but his mother signed the full agreement, handing him over to Barnardo’s in October 1885 when he was just three years old. Our records show that on entering Barnardo’s care, Arnold came down with chicken pox but soon recovered.

His entry record describes him as a 'most engaging little fellow … who prattles very prettily in a peculiar Swiss patois'.

In 1886 at the age of four Arnold was boarded out with Reverend and Mrs Darling. Arnold remained with them until 1893 and then moved in with the vicar’s gardener and wife Mr and Mrs Whyard and stayed with them for five years. Arnold would have been educated at Eyke’s village school, and would have had to behave according to its rules. A transcript of the school’s rules from 1857 is below.

Reverend Darling, vicar of Eyke, in the diocese of Norwich, came from a humble background in Northumberland. A wealthy patron, believed to be the Marquis of Waterford, who had Irish connections enabled Darling to study at Trinity College, Dublin. At the time wealthy patrons would sometimes pick out bright children and offer them the chance to receive an education. As a result, he wanted to help other children from humble origins.

This school will be opened on Monday the 14th day of June for boys and girls when the children will receive in addition to a sound scriptural education such other instruction as will fit them for their respective stations in life. Those who are distinguished for good conduct and ability will have an opportunity of becoming pupil teachers. A pupil teacher must be 13 years of age and receives from the Government £10 the first year which gradually increases to £20.

3.   No child can be admitted under three years of age

4.   The children are required to be very clean and tidy and to have their heads well combed; their hands, face, neck and ears thoroughly washed every morning. Each child to bring a pocket handkerchief, and the girls must have pinafores

5.   Children will be allowed to subscribe 1d a week to a clothing club, which will be established for their special benefit

6.   Every Saturday will be a holiday. There will also be holidays at harvest time

Any infringement of these rules will subject the child to instant dismissal. It is particularly requested therefore that the parents make their best efforts to co-operate with the teacher in carrying them out, and that they will by their good example at home further the instruction which is given at the school. 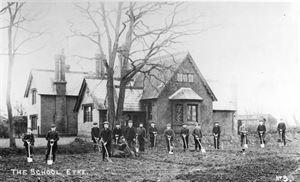 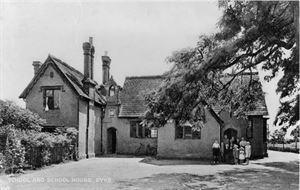 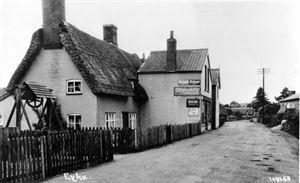 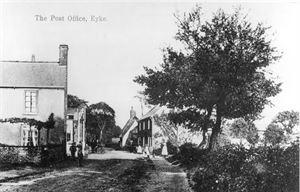 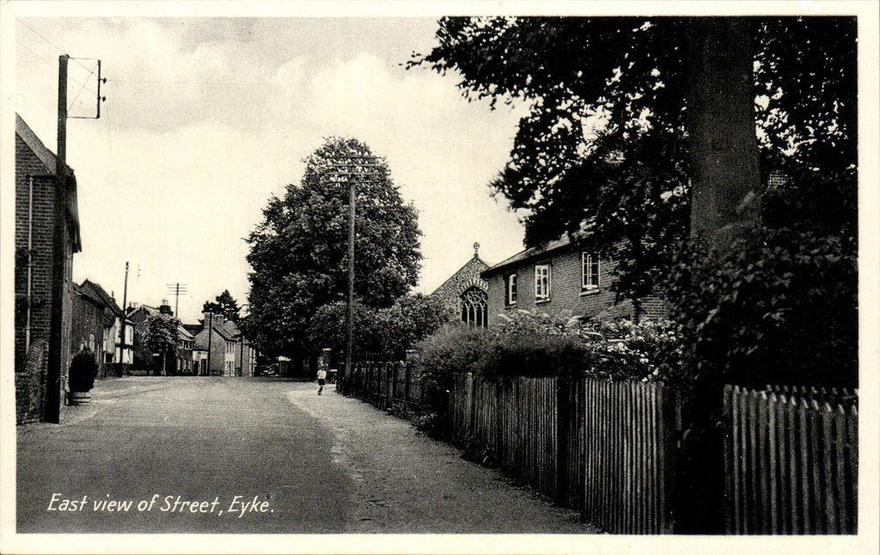 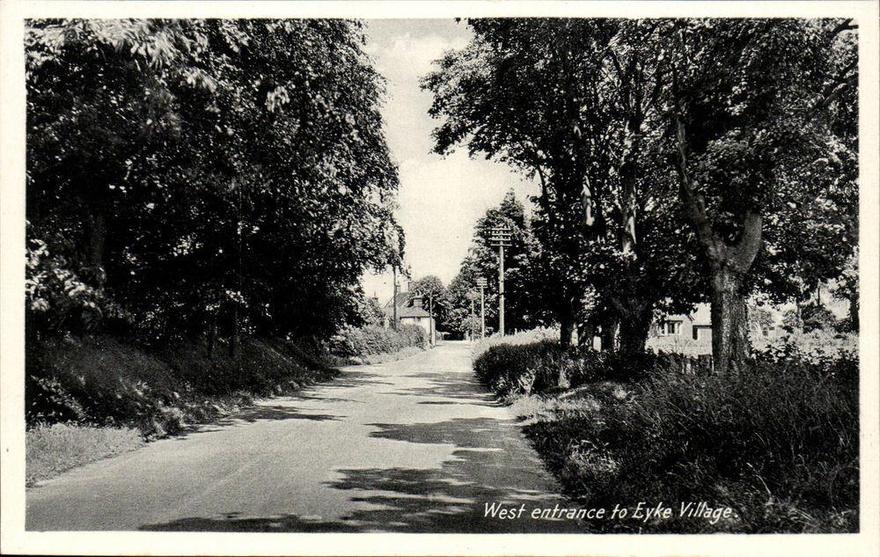 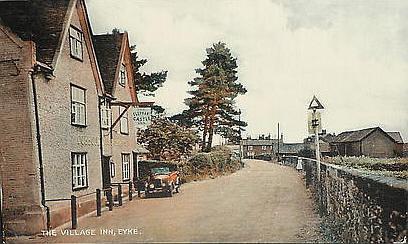 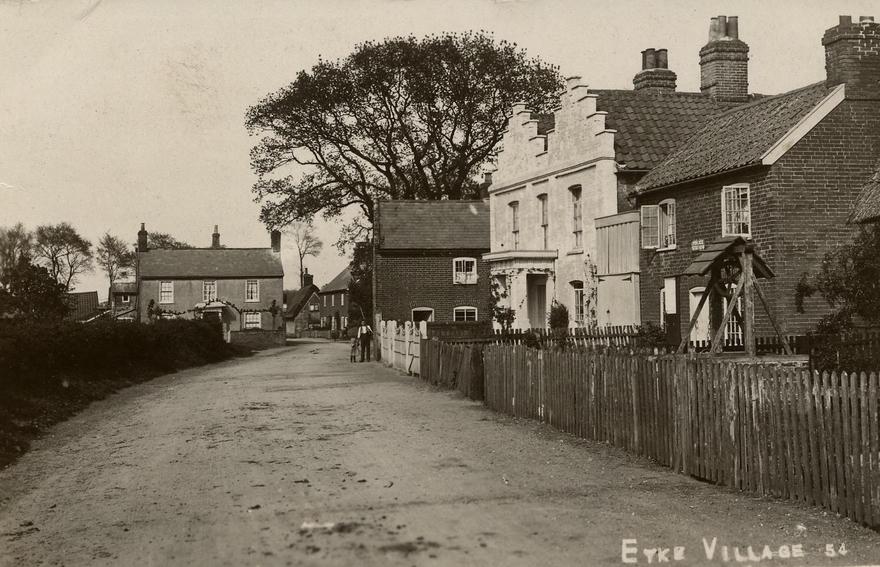 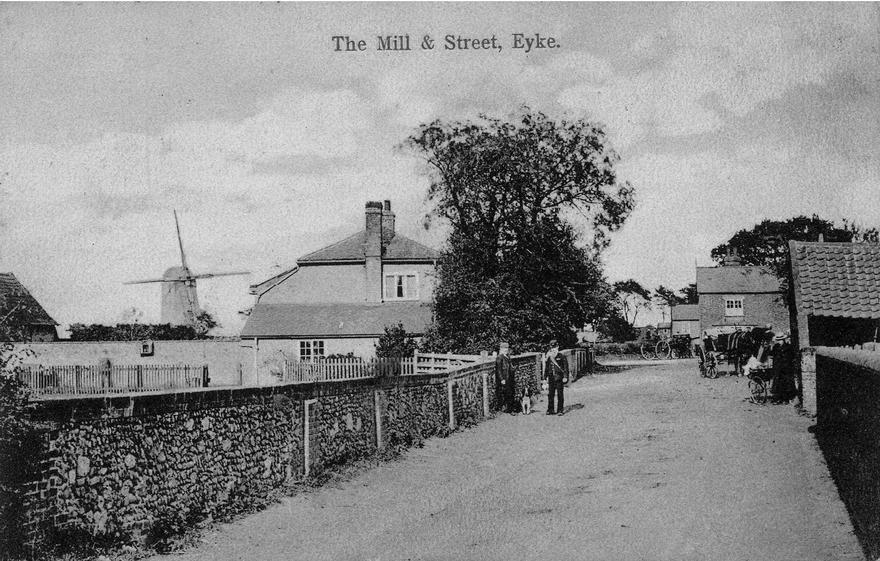 Eyke, Eike, Ike, Yke, Eyck, as it has been variously spelt, is thought to derive from an earlier word meaning 'oak'. Nearby Staverton Forest covered many acres of land in area, and was comprised chiefly of oak trees. Eyke is not mentioned in the Domesday Book, but it is recorded that the Manor of Staverton had a church and was valued at £6.00, which works out at 2d an acre. The manor house was probably north-east of The Rookery, where a moated site has been discovered.

Most people probably lived in the lower part of Eyke between the river marshes and the forest where water was easily obtainable from many springs. Here also a route can be traced between the Sutton Hoo burial site and the Royal Palace at Rendlesham.

Eyke is first mentioned in the reign of Henry II, when the King held Staverton Manor from 1171-1185. Adam de Eik had to pay a fine of three marks, but for what is not known. In the latter part of the 14th century, John Staverton, who was Lord of the Manor of Staverton, was appointed Baron of the Exchequer. The brass on the church shows him wearing his judicial robes. There was also a smaller Manor of Eyke Rectory: this included the area around the shop, one of the buildings of which is referred to as a mansion, and Two Barns, where the rector lived.

The people of Eyke have always been independently minded, and there are various recorded incidents of them rebelling against authority. One such was in 1350 when they attacked the Manor House of Eyke Rectory, burst open the gates and rifled a chest, in order to destroy the records of the services due to Robert de Redenhale.

In 1381 they joined enthusiastically in the Peasants' Revolt; in June they broke down the home of John Staverton, destroyed various records and carried away booty to the value of 100 shillings.

In 1589, 1590 and 1591, Eyke people were fined because they persisted in wearing German felt hats on festivals and Sundays instead of the English hats made of pile.

During the Civil War their sympathies were with the Puritans, and in 1644 some testified against John Stoneham, the rector, for the way he conducted the church services and his behaviour generally: they objected to him being present at a camping match, which was a rough type of football.

Eyke has been largely dependent on agriculture and its associated trades. Until the First World War there were six separate farms, and several small holdings. In addition, most families kept chickens and a pig, and grew their own vegetables. The windmill was working grinding corn, there were two shoemakers, a blacksmith, a hurdlemaker, a thatcher, a builder and a carpenter/wheelwright who was also the undertaker. Most of the land was part of the Rendlesham Estate until it was sold in 1920.

By the turn of the Millennium, the number of farms had dwindled to three: Rookery, Sink and Church Farms, the last of which had absorbed the farm at Mill End. There is one smallholding. The windmill has gone, and so have most of the village trades, as the trend has grown for most people to work outside the village. On a positive note, however, the school still flourishes, and a thriving playgroup has existed in the old schoolhouse for nearly twenty-five years. Although Eyke lost its post office in 1997, the remaining village shop is a lively concern, at the heart of the community.

The 1991 census reveals a stable population of around 359, of which 95 were under 18, and 24 over 75. There were 134 households, of which approximately two thirds were owner-occupied. Of the rest, 20 were rented from the local authority, and 32 were private and Housing Association rentals. Since that time, twelve houses have been built, and there have also been two barn conversions.

Unfortunately not the ones with chocolate chips.

Some cookies are necessary in order to make this website function correctly. These are set by default and whilst you can block or delete them by changing your browser settings, some functionality such as being able to log in to the website will not work if you do this. The necessary cookies set on this website are as follows:

Cookies that are not necessary to make the website work, but which enable additional functionality, can also be set. By default these cookies are disabled, but you can choose to enable them below: